A downloadable game for Windows

Jog, shoot and fight against hordes of enemies. Use the umbrella to launch energy projectiles, slow your descent and reflect incoming attacks.

Loved it! The animations and the character sprites for the enemies and players are both very well done. The movement was responsive and the shooting had some nice impact to it. I also liked the inclusion of small mechanics that added to the experience like the shield slowing your descent when you use it midair. One of the things that I think could be improved is the way that you communicate the different power-ups to the player before they pick them up. It might have been the franticness of playing the level for the first time, but I had trouble telling which power-up I was picking up after shooting down the pinata enemies. Overall a solid run and gun! Will be looking forward to future updates and the full game!

Thanks. Item icons have been already changed.

This game is undoubtably one of the cutest I ever saw. I really want to play when you finally release it. ^^

However, I still wanted to provide you some feedback.

-While I like the artstyle and characters, I think the sprites are just a bit too small. Atleast this stage didn't take advantige of the huge screen size compared to the character sprites. Zooming in a bit might help this but the sprites are already this smalland a bit blurry  to begin with (due to texture filtering?).

-I don't like the weapons.  While the default umbrella works well, every other weapon felt like a gimmicky downgrade. Sure the camera is a cute idea and the bommerang is fun but I'd rather stick to the Umbrella instead of using the spray can for example. The projectiles also didn't really fit the artstyle but that might be a placeholder as well.

-The circle that indicates which attack might hurt you or not is obviously a placeholder but I'd suggest to use colorcoding instead of this biiiig circle.

Other than that, I  dig this and hope you'll keep working on this. It's so refreshing to see a game in this genre that doesn't try to look like Contra and you created a neat, fun little world to explore.

Thanks for feedback. Zoom is dependent on stage/section and 1st stage isn't supposed to have too much going on with it. Weapons are a constant subject of balance, some graphics/effects are due a touch-up too.

Awesome game! I can't wait for more content :) Good luck with the game!

one thing I wish it had some visual effect when your shield is low. Things can get real hectic and can be hard to look at the hud especially on the harder difficulties

Looks interesting! Is this likely to be developed further, or should I download this version?

Thanks. It's being developed further.

Played with my daughter and had a lot of fun!

7yo's comments: It was very very fun and it would be very fun to have as a four player game! I liked that you could actually go on top of the monkey bars, and also that there was a dangerous swing! But my favourite bit was the evil clock tower. The only thing I would add is that it was four player.

It was fun a lot. The use of 2.5d is really well done(have you played phantom breaker perhaps?) Where do you make your characters? Im having a bit of difficulty in choosing a software to start from.

Thanks. I haven't played that game, these backgrounds do look like something worth investigating though.

When it comes to picking software, it depends on what you're aiming for. For the characters I used GMS' image editor, a program that doesn't surpass MS Paint that much, but the sprites' outlines are softened in the game.

That was a lot of fun. The shooting is very punchy and satisfying, jumpin' around and shootin stuff feels great.

Your animated menus and HUD are crazy aesthetic! And the attention to detail in background objects is fantastic. Good job, I really enjoyed this. 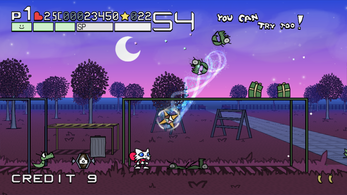 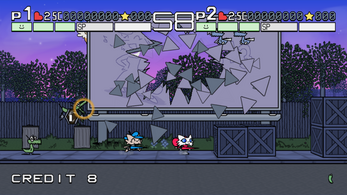 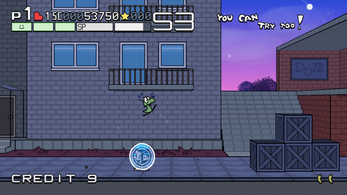